The following article from Steel Business Briefing outlines the current and continuing drop in HRC pricing.  The 4th quarter is usually a slower time for steel usage and prices are normally weaker than other quarters.  The sources used by steel mills have dropped faster than their selling prices of semifinished steel, so this likely won’t hurt their profitability, however nobody likes to drop their pricing.  With Iron Ore weak, Pig Iron plentiful and steel scrap falling $20 – $30 per net ton, the weakness in HRC is to be expected and will likely continue in November.

“US hot-rolled coil prices fell on Thursday as competition for orders continued to pressure prices with little sign of a momentum shift in the near term.
S&P Global Platts lowered its daily HRC assessment to $490-$500/st, down from $490-$510/st. Cold-rolled coil prices were maintained at $710-$730/st. Both price ranges are normalized to a Midwest (Indiana) ex-works basis. The top-end of the Platts HRC range was lowered as no quotes or transactions had been heard at the higher-end throughout the week.

The second service center source agreed that HRC prices were anywhere between $460/st and $500/st currently as “everything is volume-based.” However, he said “the wheels have come off” and there was “no reasoning at all to the market.”

According to one buyer, HRC prices were at $460/st for new spot orders and he was incredulous that people would still be paying $480/st for spot buys. However, the buyer did not confirm any recent transactions and the prices could not be factored into the Platts daily assessment.

A second buyer said he had recently placed some 200 st orders of HRC at $490/st and added he was “still not buying much or pushing mills hard on the price.”

A third service center source said he did not see any relief yet on the HRC price pressure. He recently received indication from a Midwest mill that they were “really hungry” for HRC with their “utilization way-down due to lack of orders.”

With current domestic mill lead times short, a fourth service center source said he had not seen urgency from his customers to begin placing orders. He was not actively hunting for new spot material until he had firm orders in hand. “In a sliding market, I don’t want to go to the mills with hypothetical orders,” he added. ”

Here are the graphs of  scrap pricing vs HRC since 2014.  Note, the HRC is based on short tons and the scrap is based on long tons, but the graphs tell the same story. 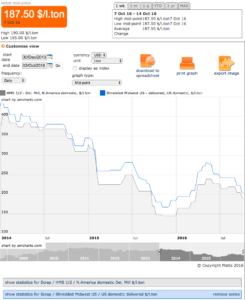 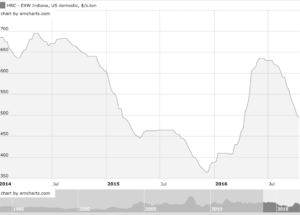